Welcome to Märta Nasvelldagen! A day with a focus on the challenges of psychiatry, to understand, prevent and treat mental illness and with the opportunity for questions and discussion. This year's theme is Psychosis in Children and Adults - Care Now and in the Future. On the entrance floor in the Psychiatry House, there is an exhibition with information about the activities, the organizations and ongoing research in psychiatry. During the break we have entertainment and snacks will be available.

Download Program: Märta Nasvell Day 2022, the program is in Swedish 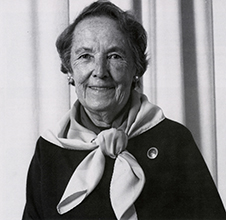 Märta Nasvell Day is dedicated to the nurse and donor Märta Nasvell. She fought all her life for people with mental illness to be treated with the same respect as those who suffer from physical illness.

Mental illnesses cause a lot of suffering and can lead to a temporary or permanent life change. In recent decades, the state of knowledge has improved, and psychiatry today has a large arsenal of evidence-based treatments to offer. There is, however, still a great lack of knowledge about how the brain works, both in health and in mental illness. In addition, there is much else to combat, in addition to ignorance, stigma and prejudice, but also the reasons why patients with mental illness die prematurely in physical illnesses.

Therefore, we want to talk about all the challenges of psychiatry and provide opportunities for questions and a healthy discussion.

Organizer: The Disciplinary Domain for Medicine and Pharmacy, Department of Medical Sciences, Uppsala University in collaboration with the Psychiatry Area, the University Hospital and the User Organizations in the Uppsala Region.

Psychosis in Children and Adults - Care Now and in the Future

The house opens for the public - On the entrance floor in the Psychiatry House, there is an exhibition with information about the activities, the organizations and ongoing research in psychiatry.

Paus - During the break we have entertainment and snacks will be available. The exhibition continues.

Other: Free admission, no pre-registration, the presentations are given in Swedish

Märta Nasvell was a nurse who loved her job and was driven by the conviction that you have to stand up for what you believe in and what you want to achieve. For Märta, this meant that people with mental illness and illness should not only be met with respect and understanding, but also that the causes of the illnesses should be identified so that they can be prevented and treated.

Märta Nasvell was born as Märta Fors in 1910 and graduated as a nurse at the Royal Academy's Nursing School in 1933. She married the 18-year-old Russian officer Nikolai von Nasvetévitch. He was the Tsar's last commander on Åland and came to Sweden after the revolution. Nasvetévitsch later took the name Nicke Nasvell and became, among other things, a much-appreciated second tenor in Orphei Drängar. Nicke Nasvell died in 1952 at the age of 60 after a long illness.

Until her retirement, Märta worked primarily as an anesthesia and surgical nurse. After her retirement and well into her eighties, she chose to work as a nurse at the Psychiatric Clinic at the Academic Hospital.

Mental illness is common and can be divided into the anxiety disorder, bipolar disorder, depression, psychosis, eating disorders and addictive disorders. In addition, there is mental illness that primarily debuts and occurs in childhood, such as autism spectrum disorders and ADHD. Up to half of the population will suffer from at least one mental illness during their lifetime. That so many are affected does not mean that everyone seeks care. A study from Denmark estimated that a third of the population receives psychiatric specialist care at some point in their lives. In Sweden, almost 60,000 people are given round-the-clock psychiatric care and almost 400,000 people receive care in specialized psychiatry. This means that approximately four percent of the population is given specialist psychiatric care each year. However, the majority of those who need care for mental health problems are treated in primary care.

How to contribute: By giving a gift to the Märta and Nicke Nasvell Foundation, you contribute to new knowledge and research at the adult psychiatric clinics at Uppsala University's Faculty of Medicine.